Back in 2011, I treated my family to an 8 day cruise in the South Pacific.  This was when my husband was about to undergo chemotherapy, and we all needed something to look forward to... that, and I am irresponsible with insurance money ;)

It was the best thing we could have done at the time.

Looking back, its hard to remember the stresses or strains around why we were going.  I am a mad collector.  I believe collector is a nicer term than junk-hoarder.  I tend to gather knick-knacks and whatsits, as well as never throwing away all sorts of stuff from trips.  I would be a scrapbooker, but I get distracted by stationery and end up being too much of a perfectionist with no actual skill.  So I have taken to making photobooks.  I now have 4 beautiful photo books for various overseas trips (hopefully one for a trip to China joins the ranks later in the year) and a few from performances.

But I hadn't made one for anyone else before.

My sister is a single mother, of 3 kids.  She had 2 when we went on the cruise.  She had a particularly difficult year, and needed a break.  I don't think she had been on a holiday for over 10 years, and hadn't been anywhere with the kids.  I thought it would be great to be able to just not worry about cleaning or cooking on the boat.  That, and I love sitting around reading books. ;)

I never knew really what she thought, because, well, my experience was different.  I joined the walking group, always join the juggling group, join the spa and sit and read in the relaxation room, sit on the deck and write poems and postcards.  She always seemed manic.  And I did worry that I had stressed her out by forcing her into a holiday.

However, she asked me to make her a photobook.  Her kiddos, then 1 and 3, still talk about the boat and want to look at the pictures.  So, Mr 2 and Ms 4 demanded a book.  The book from when we went to Tonga.

The point of all this?  Going through all the photos she took, initially, I didn't even notice it was the same trip.  My pictures are so.... involved.  Things are happening, places are important, and generally I am having to take selfies on a beach because the husband is sunbathing.  She has all these memories of people who the kids liked, the steward who made towels into animals for the kids, massive ice-creams melting onto smiling faces, sand-covered bottoms, and heaps of sleeping babies under tables, on beaches, in the arms of statues.  Basically I saw the trip through a mothers eyes.  She didn't need  to worry about cooking and cleaning... she just had time to enjoy her kids while they were small.  I definitely don't think it was easy, but I think she had a good time.

The kids definitely want to go again.  And now that there is a new baby, well.... we will have to wait until he is 3.  Next time I think Treena would appreciate being able to sign all the kids up for the club... just so she can have a chance to unwind as well. 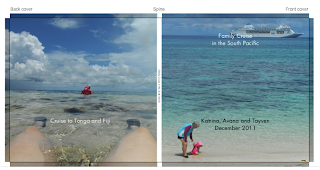 I make my photo books on Snapfish, because it is fast, easy, and really good value.  They also save the photos at full resolution... which is super handy, as I would have lost so many pictures permanently after my laptop was stolen last year.  I heart snapfish.
Posted by Unknown at 9:24 PM