Destination Friday: All the Preparations

We are now only 2 weeks away from departing, and the preparations are well underway.  Every time we go somewhere, I tend to be in one of 2 camps:
1.  The overly packed with too much stuff OR
2.  Leaving everything I need at home 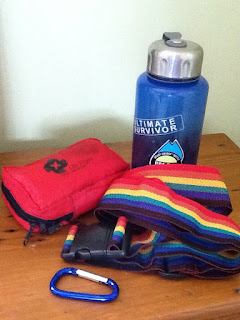 This time, my goal is simple.  Have everything I need, carry no excess, and avoid sunburn.

To this end I have been trying to pack for the last few weeks.  I bought a new suitcase, as my last one was too easy to overpack.... and the airline managed to rip the handle off on the last trip.  It has been needing to be replaced for a while.  Knowing I will have crutches has been a bonus as well, because I have had to really think about how I will journey.  The new bag is a back-pack, with the facility to pull along on wheels.

And I bought a rash-vest.  Yep, I will be soooooooooo untrendy.... but who cares.  I *hopefully* will avoid sunburn, without giving up snorkeling.  The worst part of the last trip was learning that coral reefs can be killed with sunscreen, so you are not supposed to wear it into the water.... which of course leads to major burns, and a lack of fun later on.  So the long sleeved rash vest will be handy.

Also, Tonga has strict laws against the exposure of flesh.  Wearing the vest will totally prevent me from being arrested on the beach!  Traveling with my multi-use skirts and cover-up sarongs will have another hidden benefit.

So, where have you been?